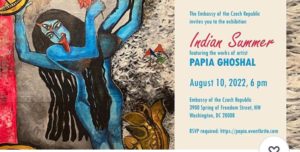 About the Artist: Papia Ghoshal is a painter, singer, actress, and poet. She has created thousands of paintings, ten poetry books, and has directed and starred in feature films and documentaries. She is the Lead singer in her group Papia Das Baul, traveling between Kolkata (India) London, and Prague. Ghoshal graduate in political science, sociology and Indian vocal music from the University of Calcutta. Masters in Indian vocal music from Karnataka University. She has also done her 6th year diploma in Indian Classical Vocal music, Rabindra Sangeet and Bengali Folk Music. She further studied at Merton College London and dedicated herself to Indian art. She was a student of the Indian legendary painter Prokash Karmakar for over 15 years. She is the International Editor of “The London Miscellany,” dedicated to literature and art. Until 2009, she was the international editor of The London Magazine. She is a curator of the Gallery Indian Images in Kolkata, London, and Prague.

Embassy of the Czech Republic in Washington overdone a nice Vernissage opening, Vernissage will be open until date of invitation.

The Czech Ambassador in Washington, H.E. Hynek Kmoníček organized on the premises of the Czech embassy a vernissage of Papia Ghoshal. 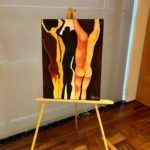 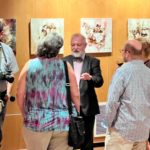 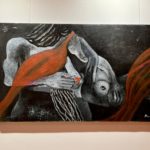 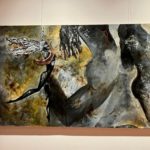 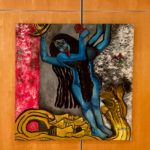 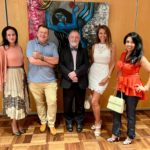 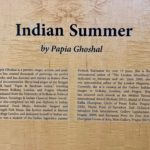 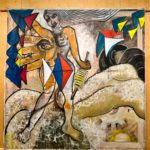 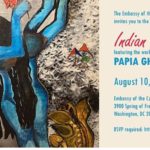