A powerful woman from Brno’s ANO in a bribery case? “She brought them here,” the sources said

The bribery affair of the administrator VIA Consult as continues. It turns out that in addition to northern Moravia, the company also established itself in southern Moravia. In Brno, the company of the now former owner, Milan Konečný, who ended up in prison, began administering public contracts eight years ago, and its arrival in the city near Špilberk is connected with the ANO movement. This was confirmed to us by three sources from the business and political environment. These facts have not been written about yet.

One of the first city districts where the joint-stock company Via Consult, renamed INTEZA advice as on June 8, 2022, began to operate, was Brno’s Černovice.

“The orders administered by VIA Consult actually appeared in Černovice in 2014, when ANO came,” a reliable source, who wishes to remain anonymous, told the PrahaIN.cz server. He is still afraid.

He had never known or heard of this company before, although he has been active in municipal politics for more than twelve years. “For me personally, it was already strange that the company’s address on Kopečná street in the center of Brno is only a place of reception without an office, as its headquarters were then somewhere in the Moravian-Silesian region,” he added.

At that time, ANO was represented in Černovice by Šárka Korkešová, the leader of Babiš’s movement in 2014. The thirty-nine-year-old clerk later appeared in the second highest post, becoming the 1st deputy mayor. That’s what he claims about himself even today. On the official website. It’s not true.

She was dismissed in mid-May 2021 and is currently an ordinary member of the twenty-one-member council. It is said that no one saw her at the town hall for a long time. Apparently, she should have been on so-called incapacity for about a year. Subsequently, she started working in a retirement home as a social services methodologist.

And actually, even party affiliation doesn’t matter anymore. The YES movement was replaced by Korkešová. In this year’s municipal elections, he will fight for the voters’ favor from the first place of the Černovice independents.

In Brno, by the way, she is associated with Pavel Dvořák, former councilor of Brno-střed and head of the Brno organization ANO. He, in turn, is perceived by all those contacted as a friend of Jiří Švachula from the Stok case. Just to clarify.

Korkešová did not respond to repeated questions. 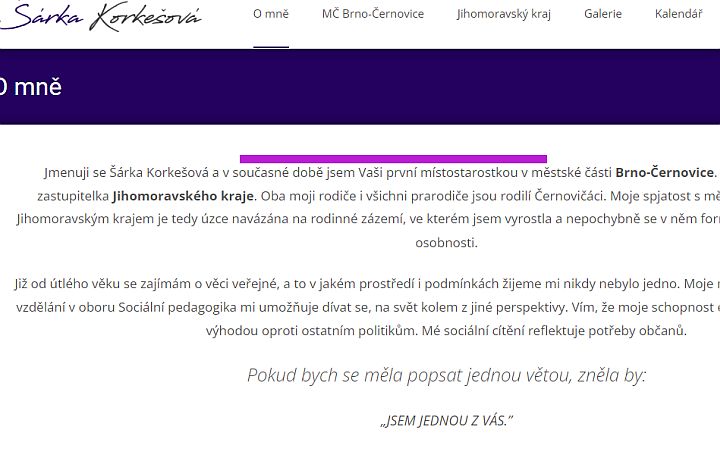 How was it then?

“Everything was organized by Korkešová, and the administrators who had been operating on the market for several years, for example IKIS or RPA, were left behind,” the source specified, adding that at that time the Brno town halls began to half-jokingly say that “the software was uploaded”.

Korkešová’s influence on the given business was not confirmed only by anonymous sources. It was also verified by the current mayor Petra Quittová (STAN). “The VIA Consult company was brought by the 1st deputy mayor for ANO Mrs. Šárka Korkešová. Unfortunately, I do not know how many orders there were from 2014. A document was prepared for the Municipality of Brno from 2019 until now, where we administered approximately fourteen contracts with this company, including our contributory organizations and one company founded by the city district,” she told the PrahaIN.cz server.

We have the list. It follows that the actions concerned, for example, the seizure of the Brno – Kneslova Kindergarten building, the modernization of housing units in Turgeněvova Street, the maintenance of public greenery or the reconstruction of the school garden of Štolcova 21 Kindergarten.

Even the large municipality had doubts about the leadership of the Brno-Černovice town hall at the time. In December 2021, therefore, he has the activities of the local government checked, several years back.

The inspection report, which was provided to the editors by another source from Brno, reveals deficiencies in many areas and states, among other things, that “the Brno-Černovice district did not use the Areál zdraví with the care of a proper manager” or that “the inspectors did not have the opportunity to verify the individual steps towards the award of a public contract because no documentation was presented to them”.

“If you’re asking who brought the company to the town hall, I don’t know. I know that she did contracts already in the previous election period under mayor Pavel Blažík (ČSSD). The sentences from the report you quote are unrelated to VIA Consult, as far as I remember. Under my leadership, we collaborated with the company on some orders, and I must say that in some cases I was not satisfied with their work. Above all, it concerned the contract for the project of replacing housing cores, where we withdrew the draft terms of reference submitted by Deputy Mayor Hasoń (KDU-ČSL) from the program and then changed them directly at the council,” former mayor of the Brno-Černovice district Ladislav Kotík told the editors.

According to the available data, from March 2020 to January this year, VIA Consult mostly administered construction contracts in Černovice for more than 53.5 million crowns without VAT. And in Bystrec, for example, from February last year to January this year, she was in charge of issuing public contracts for almost 150 million crowns. However, Bystrck mayor Tomáš Kratochvíl (ČSSD) has no information that the ANO movement, which is in the coalition, would interfere in the selection of the administrator.

“At the office of our municipal district, the selection of the administrator of public construction contracts is solely in charge of the property department, which submits a request procedure and then selects the company that is the cheapest. By law, we have to publish contracts worth more than two million crowns on the official board. But we are even tougher on ourselves at the Bystrica Town Hall, because we put orders above 50,000 crowns on the official board, so that there is as much competition as possible, because for example construction companies keep an eye on it and use different search engines to search for public contracts,” said Kratochvíl.

Milan Konečný, former shareholder and head of VIA Consult, is accused of knowingly and purposefully creating tender conditions for several tenders so that a pre-selected construction company won. He should have benefited financially from it.