Autumn with CT art in the sign of the first republic, Czech detective stories and important personalities

From Thursday, September 1, ČT art will start its ninth birthday celebrations with a week of gifts. On the very first day, he offered the audience a live broadcast of the musical production Špinarka from the Petr Bezruč Theater in Ostrava from 8 p.m. ČT art will unwrap the gifts until Sunday, September 11, in the form of concerts, recordings of theater performances or premieres of films awarded world prizes. In the autumn, the cultural station will premiere, among other things, a six-part trip to the Lifestyle of the First Republic, the documentary Toyen, Baroness of Surrealism by the well-known director and screenwriter Andrea Sedláčková, or the cycle Czech detective, whose guide will be Ondřej Vetchý.  “In addition to Špinarka, we will broadcast a unique concert on the Vltava River in September, our viewers will be present remotely at the opening concert of Dvořák’s Prague, and they can enjoy live, for example, the opening of the Zlatá Praha festival, where Dagmar Pecková will present her songs and guests. We will not miss the opening concert of the season of the Czech Philharmonic,” says Tomáš Motl, executive director of CT art. After a successful summer, when the cultural station recorded the most watched month in its history in July, the new season will bring three premiere cycles. The popular show with Miro Žbirka will be followed by the Hits’ Den with guests Michal Prokop, Petr Fiala with Mňága and Žďorp or Ivan Hlas. And the Czech detective, with guide Ondřej Vetchý, will present the history of a genre popular with readers, which domestic writers have been working on for almost a hundred years. The lifestyle of the First Republic will remind you of the interwar period associated with elegance, nobility and elementary decency, as the program guide Jan Jiráň says. “After all, even gentlemen went to football in ironed suits with hats on their heads. The opposing players used to be lettuce and frogs, the judge a carrot, so they didn’t have to be threatened with lynching. It’s a shame that respect for competition and other opinions will probably never return. And not only to football stadiums.”

Traditionally, solitary documents will not be missing from the program. An architect who fulfills his dreams is the subtitle of the portrait of Petr Kolář, the author of the award-winning resort in the Maldives or the national Olympic house in Pyeongchang. The creative tandem Marek Najbrt – Pavel Klusák, after the pair Vodňanský – Skoumal, shed light on other musicians in the documentary Burian vs. Grandfather. Petr Nikl’s Solstices will present a wide range of skills of one of the founders of the Tvrdohlaví group and winner of the Jindřich Chalupecký Prize from 1995. “We worked using the method of staged situations for a static camera. Over the course of one year, we had ten shooting days for the film. There are ten chapters in the movie. We shot one chapter in one day, which had to fit in five minutes,” explains Petr Nikl. ČT art will premiere films about the painter Toyen and the architect Adolf Loos. The film Well Hidden Jan Klusák is dedicated to the doyen of Czech modern music. From Joke to Insignificance maps the work of Milan Kundera, including life in Brno or a visit to the University of Rennes, which took him to France. Visitors to the ctart.cz website will also find new content in the autumn, where Pavel Karous, a sculptor and teacher, will be heading with his eight-part series Aliens and Predators, who this time will focus on the evils of contemporary art in public space. Jakub Adamus and Jakub Hošek are preparing their podcast about six important personalities from the history of Czech television. Scene of the crime: Kavčí hory will present Kamila Moučková, Jindřich Fairaizlo or Miloš Frýba in individual episodes lasting more than half an hour, and will make the remarkable archive of ČT accessible to listeners in an entertaining way, thus showing the self-reflection of the public television institution. You can find the list of premieres of the autumn CT art program, including photos of the programs, on ePress.´
JK 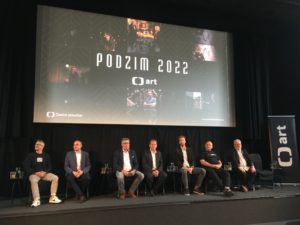 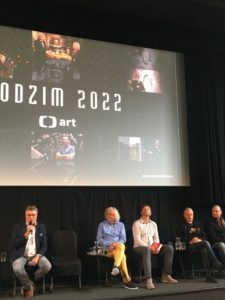