In the beginning, was the word, and the word was Cimrman. It was in 2013 that Emilie Machalová, a director, uttered it to her friend Brian Stewart, a Prague-based British actor.

She described Cimrman as the go-to standard for understanding Czech culture: If Brian (albeit performing under the pseudonym Ben Bradshaw) really wanted to grasp our humour, then getting to know the legendary Cimrman was a must. Brian was open to the idea.

They watched the original recording of Záskok (The Stand-In) from 1994, and the British actor was surprised to find that despite not understanding much Czech, he had a lot of fun.

They both surmised that if you can ‘get’ comedy without understanding the language, you must be dealing with quite extraordinary work, capable of reaching out across cultures; after a short discussion, they agreed to join forces, to craft an English translation.

They asked for permission from Aura-Pont s.r.o., the agency representing Zdeněk Svěrák and the estate of Ladislav Smoljak.

After submitting the first proposal, Zdeněk Svěrák’s daughter Hana Jelínková, a qualified English teacher, also joined the project as a reviewer; all the texts were given a final check. Both Brian and Emília very much welcomed her participation, since it had been their aim from the very beginning that the result should be as close as possible to the original – keeping all the original Czech references and its inherent ‘Czechness’ intact.

The Cimrman English Theatre translations are the only English versions authorized by Zdeněk Svěrák and the Smoljak family.

Regarding the production, Brian and Emília then decided to approach the Echo Agency, which manages the Czech Jára Cimrman Theatre in Prague’s Žižkov district. Before that, however, they needed proof that the play would really gel with an English-speaking audience.

Brian hired six actors from the British Abbey Theatre in St Albans for a rehearsal reading before an audience of 40-50 people, on 9 February 2014. The play was very well received; the audience laughed in all the right places.

Armed with a video of the British audience reactions, Brian met with Václav Kotek from the Echo Agency and Zdeněk Svěrák. That meeting gave the green light to a practice reading for a Prague audience, to gauge the potential of the play in its entirety.

And so it was, that a small troupe of Prague-based English-speaking actors came together comprising Ben Bradshaw, Adam Stewart (nephew of Brian Stewart), Kevin Michael Clarke, Peter Hosking, Michael Pitthan and Brian Caspe.

This group’s rendition for Prague expats met with anticipated success. After a positive response from the audience, it was agreed that with some changes in the script (and one change in the cast), the play would première on October 25, 2014, which it did.

The Cimrman English Theatre went on to perform beyond Prague, in Brno, České Budějovice and Košice, and in 2016 even toured the USA.

These days you can regularly see the group perform at the Jára Cimrman Žižkov Theatre, doing one show a month. 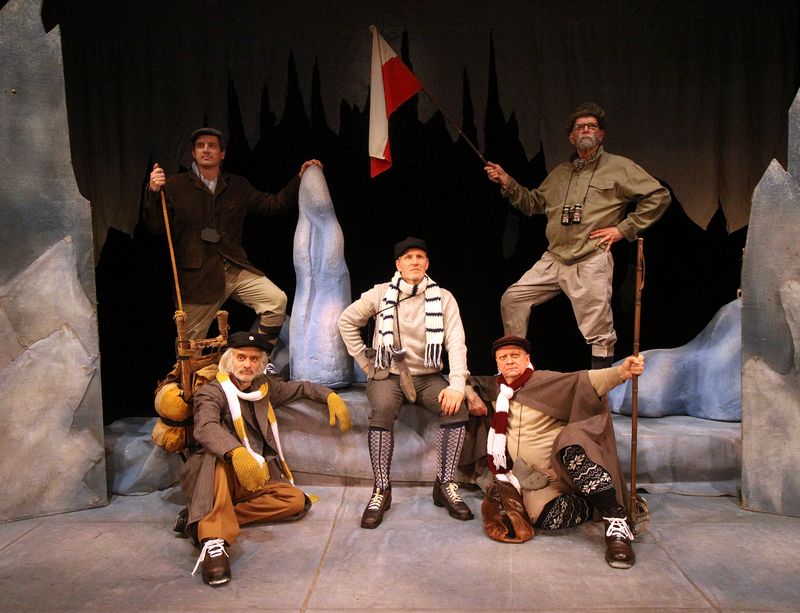 Who Is Mysterious Jára Cimrman

In 2005, the majority of Czechs voted for Jára Cimrman to be the Greatest Czech in our history. However, his nomination was taken back since only real people may be nominated in the contest. So, who is beloved Jára Cimrman, unofficial the greatest Czech of our times?

Jára was born sometime between 1853 and 1859 in the Austrian-Hungarian empire to a Czech tailor and Austrian actress. Due to family poverty, his parents dressed him in his sister’s dresses, so he found out only at the age of 15 that he is actually a boy.

According to his biographers, he constructed the first rigid airship, invented yogurt, created the philosophy of extremism, proposed the Panama Canal to the US government, created the first puppet show in Paraguay, the reformed school system in Galicia, and corresponded with George Bernard Shaw for many years, without response.

Cimrman was also an adventurer traveler who investigated the life of cannibalistic tribes in the Arctic. Once he was running away from the enraged tribe, he missed the North Pole only by seven meters and thus almost became a first human reaching the North Pole.

As you already know from the first paragraph, unfortunately, Jára is not real. His character was invented in 1966 to caricature Czechs as well as our culture and history. He became a national hero, and more stories about his life started to appear.

The main authors of these stories were Svěrák and Smoljak who started to compose a theatre plays that became so iconic that the Czechs can almost quote them word by word.