Demographically, Czechia resembles more a prosperous western country than a former Communist one.

ts population is growing and in 2021 Czech women were having more children than anywhere else in Europe. Czechia is bucking the trends of all of the rest of former Communist Europe. It is attracting immigrants, it has low rates of emigration, and demographically it resembles a prosperous western country rather than a former Communist one.

The war in Ukraine has made predicting the future a fool’s game though, as no one knows how many of the 431,285 Ukrainians who have registered for “temporary protection” in Czechia have either remained or will ever go home – thus giving a potentially massive and unexpected boost to the country’s total population.

In 1989, Czechia’s population was 10.3 million. According to the 2021 census, it is now 10.5 million, a figure which does not include the Ukrainian refugees.

Czechs are ageing like all Europeans, but when it comes to what is called “natural change” – the balance of births and deaths – Czechia has fared relatively well. Between 1994 and 2005 it had a period in which there were more annual deaths than births, but for most years since then until 2020, when COVID-19 pushed the mortality rate up, it has had more births than deaths.

However, the fact that Czechia’s population is now bigger than at the time since the collapse of Communism is almost entirely due to immigration. It is this that sets it apart from other former Communist countries and aligns its trends with those of many Western European countries whose populations would shrink without a constant stream of newcomers. 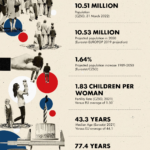 How come Czechia is an outlier? The answer lies in the map. Demographers love to argue about whether the old adage of “demography is destiny” is true or not, but Czech demographers can be forgiven for not caring. As far as they are concerned geography is destiny. “I will tell you a small secret,” says Tomas Kucera, a senior demographer at Prague’s Charles University. “Czechia has one of the best geographical positions in Europe.”

The argument runs that, lying at the intersection of east-west and north-south transport corridors, Czechia has long been ideally placed for an economy to flourish and that during the transition from Communism this was a key factor cushioning it from the demographic headwinds faced elsewhere in former Communist Europe, with the exception of Slovenia.

“If Moldova had been where we are and we were where Moldova is,” says Kucera, “we would be in a similar situation to Moldova and vice versa.” Since 1989 Moldova has lost one-third of its population.

When the Austro-Hungarian Empire collapsed in 1918, says Kucera, the new Czechoslovakia – or rather that part of it which is now Czechia – inherited much of its industry, which it has preserved and developed ever since. In the inter-war years, Czechoslovakia was a developed economy on a par with several Western European countries, whose demographic trends it also mirrored.

In Communist times it remained an important industrial power, but demographically its trends changed completely to run in tandem with other communist Central and Eastern European countries. Then, following the collapse of Communism, which unlike everywhere else did not lead to a complete economic collapse, Czechia’s demographic trends rapidly flipped back to being part of the Western European mainstream.

When a fertility rate crash is not a crash

The story of Czechia’s fertility rate, which at 1.83 last year surpassed that of metropolitan France which has long had one of Europe’s highest rates, is a fascinating insight into its demographic history.

During the depression years of the 1930s uncertainty about the future pushed it below 2.1, the level a population needs to replace itself without immigration. Remarkably, it then shot right up beyond this during World War II, in part because Czechia was mostly spared the fighting and because having children was a way to escape being sent for forced labour to Germany.

The fertility rate stayed high during the early Communist years, which for many were ones of optimism. It then dipped below the replacement level between 1966 and 1972, and finally slipped below it for good in 1981. In 1989 it was 1.87, but it then plummeted to 1.13 a decade later. In that year, 89,471 babies were born, the smallest number in modern Czech history. Ever since it has been creeping back up. In 2021, there were 111,793 births in Czechia. In the first half of 2022, however, there were some 50,000 births meaning that this year, for reasons that are not yet clear, the birth rate looks set to decline by about 10 per cent compared with last year.

The complete collapse in the fertility rate after the demise of Communism happened across Central and Eastern Europe (CEE). These were years of economic turmoil and almost everywhere ones of intense hardship, unemployment, increasing mortality rates and high rates of emigration.

Research by Tomas Sobotka of the Vienna Institute of Demography, however, reveals that what was happening in Czechia was completely different. He argues that “the crash in fertility rates” was not really a crash at all, but rather the realignment of Czechia’s eastern European Communist-era marriage and childbearing patterns back to the Western European ones it had had before the war.

A woman born in 1965 typically had her first child when she was 20 or 21 years old, he says. But a woman born in 1990 “is typically having her first child when she is 29 and inbetween you have this transition when women and their partners were waiting longer before they had their first kid. So, in this transition period, fertility rates went down, in part not because people stopped having kids, but because they were waiting until they were older.”

Another reason why the age of having a first child in Czechia has shot up very fast, he explains, is that under Communism sex education was poor and the use of the contraceptive pill was low, so many first-time pregnancies were accidental. In 1990, only 4 per cent of women of childbearing age took it. This changed rapidly and so the numbers of unplanned births and abortions plummeted. Currently, about 30 per cent of Czech women of childbearing age take the pill.

Another factor setting Czechia apart from its former Communist peers after 1989 was that while healthcare went into crisis everywhere else, the fact that Czechia suffered no comparable economic collapse meant, says Sobotka, that “there was a very rapid investment into new technologies, which were not available before. So, things like treatment of cancer and some other more difficult conditions related to old age improved rapidly, and mortality rates started declining, just a few years after the regime change and after 30 years of stagnation.”

Unlike much of the rest of Communist Europe, Czechia, which had been industrialised before World War II, was not dominated by huge industries which, if they closed, led to complete economic collapse of whole towns and regions, as happened in Slovakia for example. Its smaller industries were far better able to weather the transition and ever since Czechs have had far less economic incentive to emigrate than citizens of other former Communist or indeed even some Western European countries.

“For our people, there is no sense to go to work in Britain,” says Kucera, “because the money they will earn there, minus the cost of accommodation, means they will earn much less than they are going to earn here.”

Research by Sobotka also reveals that Czechia’s emigration rate is closer to that of prosperous Western European countries, and unlike that of Central and Southeast European ones where large percentages of whole age cohorts have gone. For Czechia, he says, between 4-6 per cent of people of every generation now live abroad, “which is not so different from what you would find for the UK or France.”

Emigration is hard to track, of course, and last year’s census showed that more people had left the country than had been anticipated based on the 2011 census. This led to Czechia’s 2021 population figure being adjusted down by 200,000 compared with 2020, but does not mean that the country’s population fell by that much in a year.

Above all, what makes Czechia more similar to a wealthier western country in terms of demography is immigration.

Based on Czechia’s data and trends to the end of 2021, projections by Eurostat, the EU’s statistical agency, foresaw a gentle rise in Czechia’s population to 10.76 million in 2030, falling back to where it is today at 10.53 million by 2050. Now, however, all bets are off. By September 13, some 431,285 Ukrainians were registered as having been granted permission to remain in the country because of the war.

For sure, some or even most of those Ukrainians could have since returned home or left for other countries like Germany. But large numbers remain and will continue to do so and as many refugee children begin school and the longer the war continues, the higher the number who will make their permanent home in Czechia.

According to Kucera the population of Czechia is “definitely going to grow in the medium- and long-term perspective”, but the unexpected arrival of hundreds of thousands of Ukrainians means that Czechia’s demographic future is “very uncertain,” and for now impossible to predict.

Indeed, says Kucera, “normally the more distant the horizon you are forecasting, the less certain the forecast. We now have a paradox – the most uncertain are short-term forecasts!”

Tim Judah is a correspondent for The Economist. He has been working on the subject of demography as a fellow of the Europe’s Futures programme of the Institute of Human Sciences in Vienna and the ERSTE Foundation.