Of the first four shots Olha Dembitska fired from an AK-47 assault rifle in her life, one hit the target.

On this occasion, the target was the shape of a human body at a shooting range in the Czech Republic. Next time, it might be for real, in Ukraine, and the target could be one of the Russian troops who have invaded her homeland.

Dembitska is one of at least 130 men and women who have so far undergone free-of-charge training for Ukrainians living in the Czech Republic who want to learn how to fight the aggressor.

“I might return to Ukraine if they need me,” she said.

Almost none of the participants had any experience with weapons before war struck their homeland.

Since Russia launched its brutal attack, Ukrainians from all parts of the country and elsewhere have been arriving in Brno, attracted by courses designed to teach them essentials and skills to safely handle lethal rifles while being able to inflict damage on their enemy.

Beside learning to shoot, the courses give them the basics about guns, movement around the battlefield and a lesson in providing first aid, something that can save lives if they`re mobilized by their embattled country or decide to return home as volunteers to join the Ukrainian army.

They are all motivated.

“It´s horrible,” Dembitska said about the situation in her homeland. She gets her news from social media and from phone calls with a friend based in the southern city of Kherson, seized by Russian troops in the early stages of the invasion.

“She tells me everything. They haven´t received humanitarian aid. It´s a horror what the Russian soldiers are doing, I´m sick of it.” 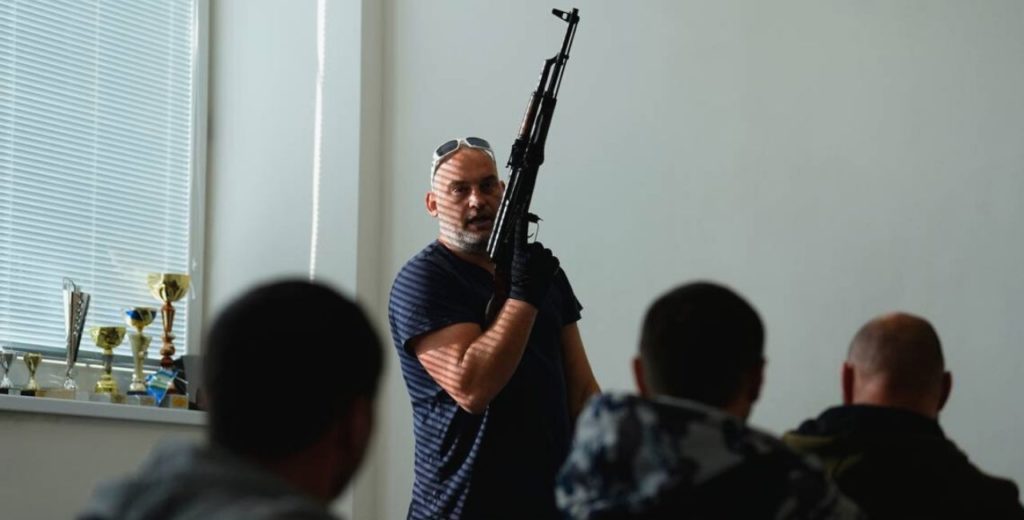 Michal Ratajsky, the owner of CS Solutions, a security company that offers the training program at its base on the outskirts of Brno, located some 200 kilometers southeast of Prague, called it “our contribution to the help for Ukrainians.”

“We view it as a morale boost we´re giving them in this situation, an effort to show we´re supporting them and that we will do for them what we can at the given moment,” Ratajsky said. “That was our motivation and goal.”

A crowdfunding campaign helped secure enough money for the ammunition, while his company provides the rest, including experienced instructors, weapons and the shooting range.

Ratajsky said the brief, three-hour training can´t do miracles but should be enough to introduce the Ukrainians to new, unfamiliar skills.

“We know that we don´t make soldiers of them in those three hours,” he said. “We try to do the maximum for them in the time, with the focus on their safety.”

Some of the participants have returned for repeated lessons. Some have come from as far away as Vienna. Some took the course on their way back to Ukraine from Western Europe, Ratajsky said.

Yehor Nechyporenko, 38, who had traveled some 260 kilometers (160 miles) from the town of Mlada Boleslav to Brno for the second time said he is helping Ukrainian refugees who have arrived in the Czech Republic but wants to be ready to go back home to fight.

“It´s very useful for me,” he said of the training. “I really like it. I need to learn those things because I didn´t do military service.”

Nechyporenko said he was sure the Russians have no chance of taking the entire country.

“I think the war will be over in a couple of months,” he said. “And if we see we´re losing, we´ll all travel home.”