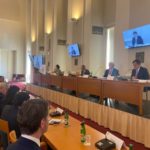 At this conference which was inaugurated by the Czech Foreign Minister Jan Lipavsky, Andorra Minister Maria Ubach Font, the Special Representative of the European Union for Human Rights, spoke s Eamon Gilmore, among other high personalities.
In his speech “Multilateralism of the 21st century, balance from the Peruvian perspective to 200 years of Peru’s independence”, Mr. Vice Minister exposed his thoughts on Peru and its 200 years of independent life, time in which he has reafi Peru’s commitment to multilateralism and rules-based international order and dialogue as best tool to fulfill its role in international system.
Source