In the Spanish hall at Prague castle a festive evening

Slovenian-Czech cultural relations within the framework of 150. Birth anniversary of Slovenian architect Jože Plečnik, whose honorary patrons were the president of RS Borut Pahor and the president of Czech Republic Miloš Zeman. The management of Prague Castle and Architecture Week Festival presented Plečnik Awards on this occasion.

Awards for lifetime work and outstanding achievements in the field of architecture, construction and architectural heritage protection were received by meritorious architects from

Slovenia, given out by the President Miloš Zeman of the Czech Republic at a special reception.
Nominees from Slovenia were proposed by the Chamber of Architecture and Space of Slovenia. And the award goes to:
Andrei Hrausky
Majda Cregar
Michael Kerin
Edward Ravnikar Jr.
Vesna Košir Kozlič
Matthew Vozlič
Organizers also awarded special awards from Jože Plečnik to some Slovenes and Czechs this year for his contribution to the development of Slovenian-Czech cultural bonds. Confessions were received by:
President of the State Council of the Republic of Slovenia Alojz Kovšca
Ambassador of the Republic of Slovenia in the Czech Republic Tanja Strniša
Director of the National and University Library in Ljubljana Viljem Leban
For the Ministry of Culture of the Republic of Slovenia, the head of the Directorate of Cultural Heritage Špela Spanžel
Dr. Damjan Prelovšek
Recognitions were also received by PhDr. Juraj Chmiel, CSc. Czech ambassador in Ljubljana and doc. In. arch. Zden .k Lukeš from the Czech Republic.
This year the Jožet Plečnik Grand Prize was exceptionally awarded to the president of the Republic of Slovenia Borut Pahor for his long-term support to the development of Slovenian-Czech cultural relations. The award was given out on the 26th. August 2022 in Ljubljana.
Since 2018, the management of Prague Castle and Architecture Week Festival have been awarding lifetime work awards for outstanding achievements in the field of architecture, construction and protection of architectural heritage to important Czech architects. The first Plečnik awards were given out as part of the event celebrating the 100th. anniversaries of the founding of Czechoslovakia, this year they will be awarded for the fifth time.
The awards bear Plečnik’s name because of the outstanding contribution of a Slovenian architect to the reconstruction of Prague Castle, which was entrusted to him by the first Czechoslovakian president Tomáš Garrigue Masaryk. 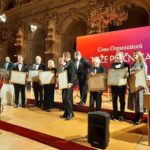 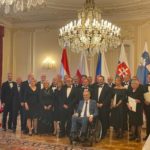 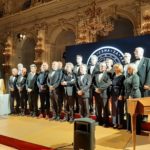 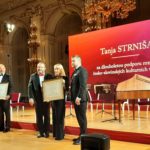 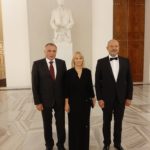