The Ukrainian initiative World Embroidery Day received the Europa Nostra Prize for the Care of European Cultural Heritage yesterday at the National Opera in Prague. The initiative received a special prize from the public – 11 thousand European citizens voted for it among 30 other projects. The awards ceremony took place as part of the European Cultural Heritage Summit, which is part of the Czech Presidency program in the EU Council.
World Embroidery Day is a holiday that helps preserve the iconic Ukrainian embroidered shirt – embroidered shirt – as an important element of the heritage of the Ukrainian people. The initiative began as a student flash mob in 2006, initiated by student Lesja Voro Inuk. Every third Thursday in May, Ukrainians and friends of Ukraine from over 100 countries wear embroidered shirts to celebrate this heritage. Celebrations of Embroidery Day are also held in different cities of the Czech Republic. For example, in Prague, there is a parade in pendants in the historical center of the city.
The 10,000 euro reward that the World Embroidery Day will receive for its victory, is dedicated to the author of the initiative Lesja Voro řízeníuk for the establishment of the Museum of Ukrainian Embroidery in Chernivtsi.
One of the 30 laureates of this year’s Europa Nostra prize also became the project of restoration of the Church of St. Andrew, which stands on the Andrijivsky Uzvoz in Kiev.
The prize for embroidery was presented by Hermann Parzinger, executive president of Europa Nostra. “At a time that is particularly difficult for Europe and the world, we want to convey the message of support and solidarity to the people of Ukraine and to the many experts and volunteers who continue to work there despite the reprehensible Russian invasion. We are very proud that two of this year’s winners come from Ukraine: the excellent restoration of St. Church Ondřeje in Kiev and the remarkable initiative World Day of Embroidery, which won a very prestigious award for the public, ”he said.
_____________________
The initiative from Ukraine “World Embroidery Day” has become one of the winners of the 2022 European Heritage Awards/Europa Nostra program, the project “Andrewska Church” – laureate. The awarding took place at the Prague State Opera House on September 26 as part of the European Cultural Heritage Summit-2022, which takes place as part of the official program of the Czech Republic presidency in the Council of the European Union.
Всесвітній день вишиванки won a Public Choice Award. The initiative received the highest number of votes in an online poll that attended almost 11 thousand citizens from all over Europe. The organizers presented it as an “annual international holiday that contributes to the preservation of the cult Ukrainian embroidery as an important element of the heritage of the Ukrainian people”.
Among the 30 winners of this year’s award there is another project from Ukraine – Andrew’s Church in Kyiv The restoration of this church returned to the people of Ukraine a monument that has significant cultural and spiritual value, the organizers said.
“At a time of difficult trials for Europe and the world, sincerely congratulating all the winners of our Award, we want to convey a special message of support and solidarity to the people of Ukraine, in particular to the many heritage preservation specialists and volunteers who continue to t am to work despite the terrible invasion of Russia into their country. We are particularly proud that this year’s two winners are from Ukraine: the outstanding restoration of the St. Andrew’s Church in Kyiv and the wonderful “World Embroidery Day” initiative, said Europa Nostra Executive President German Partzinger during his presentation at The gardens of Lesya Voronyuk, the initiators of the celebration of the world day of embroidery. 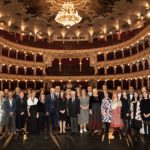 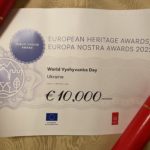 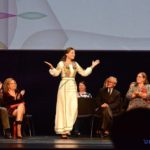 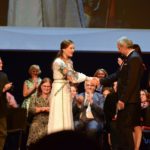 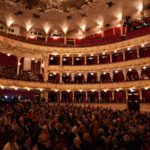