On Thursday, June 2, a charity concert of the National Chamber Orchestra Kyiv Soloists, National chamber ensemble was held as part of one of Europe’s most prestigious music festivals, Prague Spring. The collective presented a Ukrainian music program, which included the compositions of Alexander Shimka, Valentina Sylvestrova, Miroslav Skoryk, and the folk song “Floating Duck”, which has been a nationwide-Ukrainian requiem for the dead heroes for many years. The hall thanked the musicians with long applause, and the pee of the masterfully played song “Floating Duck” applauded standing.
“Kiev Soloists” definitely won the hearts of the vibaglivoí ” Czech public and hopefully not once again return to Prague. At the same time, thank you very much to the organizers of the festival “Prague Spring” for the trust shown in Ukrainian performers and organizing the concert in a short deadline.
Proceeds from ticket sales have been transferred to meet the needs of the Armed Forces and the purchase of humanitarian assistance for temporarily displaced persons in Ukraine.
Photo by: Festival Pražské jaro / Prague Spring Festival 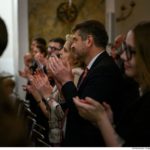 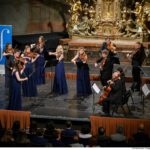 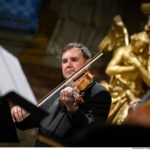 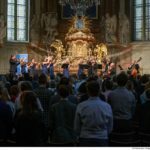