Before returning to Ukraine, Olga and Eugene Perebynis handed over Ukrainian books from a private library that they collected during five years of their diplomatic mission to the City Library in Prague. The books from September will be replenished by the Ukrainian bookshelf in the library, which the Perebynís spouse actively supports since 2018 Currently, 500 books in Ukrainian are already available to library users. About as much more to be added from September this year.
“These are not just books, these are my best friends during my 5 years of life in the Czech Republic. That’s why it was important for me to pass them to the library – for books to live, they should be read,”- explained her decision to hand over books from the family library Olga Perebynis.
Deputy Library Director Zuzana Kopentsova thanked for the donated literature and expressed hope that the library network will become a place of regular meetings for Ukrainian children and their parents. After all, in the premises of the Prague book fair, you can not only borrow books or work in reading halls, but also use free Internet, children’s playrooms or just communicate in visitor halls.
In addition to art literature, there are many albums with the works of Ukrainian artists and photographs among the donated books, as well as editions of Ukrainian history, cultural science, art science or, for example, textbooks on the Ukrainian language as a foreign one. According to Zuzana Kopentsova, the library greatly appreciates the decision of the Perebynis family and will organize an exhibition of gifted editions in the library hall before they become available to all registered readers.
You can read the rules of use of the City Library in Prague at: https://cutt.ly/bZRu32T

Before the planned return to Ukraine, spouses Olga and Jevhen Perebyjnis handed over Ukrainian books from their private library to the City Library in Prague, which was created during the five years of their stay in the Czech Republic. In addition to fiction, the collection mainly contains books on Ukrainian history, art or philosophy. There is also a textbook of Ukrainian as a foreign language.
“They are not “just” ordinary books, they are my close friend for the last five years. That is why I wanted to put them in the library – so that they could continue to live, because books live when someone reads them”, justified her decision to donate books to the library Olga Perebyjnis.
Head of the Library Fund Department Zuzana Kopencová thanked for the generous donation and expressed hope that libraries will become a common place of meeting for newly arrived Ukrainian children and their mothers. In the library they can not only borrow a book in their native language or Czech, but also read, play or talk for a while. 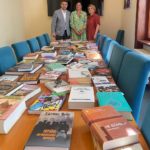 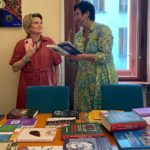 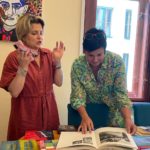 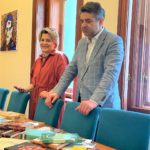