The American Football League Snapbacks Final will feature a repeat of last year’s final. The Prague Lions will face the defending champion Vysočína Gladiators on Sunday, July 17 at the FK Viktoria Žižkov stadium. The final duel of the season starts at 16:00. Last year’s final was dominated by the Gladiators on their home field in Jihlava 23:0.

Both finalists fulfilled the forecasts before the season and went through the basic part and the semi-final matches confidently. The Lions also won their back-to-back match at the Gladiators. But the match was significantly affected by the injury of American Gladiators quarterback Ryan Pahos. The defending champion called Jan Dundáček out of sports retirement and has not lost since. Dundáček showed that he has not forgotten anything from his mind and was also a key figure in the 49:6 win in the semi-final against the Ostrava Steelers.
The defending champion thus averted a disaster in the form of an injury to a foreign reinforcement and is one step away from defending. But he has a strong opponent on his way. The Lions outclassed all opponents, including the semi-finals, when they won 59:6 over Přerov Mammoths. The Lions offense boasts the highest productivity in the league and showed in the regular season that it can win with dominant performances in both the running and passing games. Opponents’ defenses basically had no choice but to choose whether the Lions would pick them apart on the ground or through the air. No team managed to eliminate both phases of the attack this year.  In attack, the Lions rely on the performance of running back Adam Žouželka, who joined the Lions before this season from Přerov. In his first season with the Lions, Žuželka scored almost 1,000 yards on the season and added 16 touchdowns. Snapbacks dominated the league in both of these individual stats and are thus one of the key players of the offense.  In addition to Žuželka, the Lions offense can rely on American quarterback Shazzon Mumphrey. He followed up on last year’s season with the Lions, which earned him the league’s Most Valuable Offensive Player trophy.
As the team leader, Mumphrey will have the opportunity to avenge last year’s 0-23 loss to the Gladiators.Dundáček and the final in Žižkov. In 2016, it was his action at the end of the Czech Bowl in the Prague Black Panthers jersey against the Lions that went down negatively in the history of final matches.  As a quarterback, Dundáček appeared in the defense of his team in the last action of the game to prevent the Lions’ last desperate attempt for a touchdown at 10:9. Lions quarterback Matthew Silva made a long pass across half the field only to find the gloves of Dundáček, who caught the ball 7 yards from the end zone, and then Dundáček accidentally ran into the end zone.  According to the rules, the Lions were supposed to get 2 points for a safety and win the title. However, the referees evaluated the situation in such a way that he caught the ball at 5 yards and according to the rules, he got into the end zone within the rules.
“I have a long history at Žižkov, so I can’t wait for it,” said the Gladiators’ quarterback shortly after winning the semifinal.  But Gladiators are not interested in this story. They are a step away from the defense and the team works both in attack and defense. Jan Dundáček is a great weapon both in the air and on the ground.  A big question mark hangs over the health of national team running back Jan Dunovský, who has been plagued by injuries all season. But even in the semi-finals, Stanislav Benc showed that he can fully represent his colleague. In addition to his runs, Dundáček has strong aerial support.  Dundáček quickly played with Vojtěch Mašita after joining the team during the season, who thus became a favorite target of passes. In addition to Mašita, there are other excellent receivers such as David Calta, Petr Čermák or Tomáš Hlach.
Fortuna Czech Bowl XXIX promises a great spectacle, stormy atmosphere and American football at the highest level. Both finalists are in excellent form and the final match will be a true battle of the titans. The match for the Czech champion is scheduled for Sunday, July 17 from 4:00 p.m. and will be broadcast live by Premier Sport 2.
JK 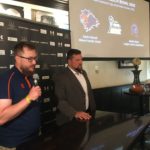 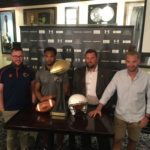