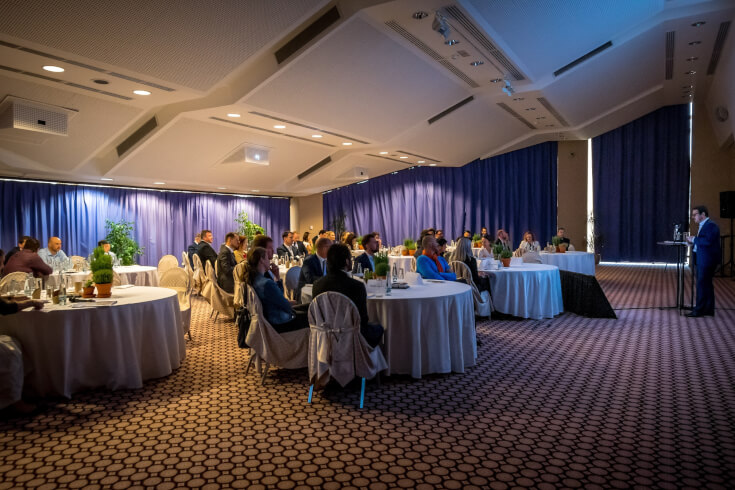 The Board of Directors of the Prague Convention Bureau consists of five members representing professional congress organizers (Professional Congress Organiser – PCO), event agencies (Destination Management Company – DMC), meeting facilities, hotels and suppliers of accompanying services. The term of office of individual members is three-year long, however, due to the pandemic, it was decided in 2021 to extend the term of office of the current Board of Directors by one year. The election of new members of the Board of Directors, together with the election of the members of the Audit Committee, were thus scheduled to take place in spring 2022.

Immediately after the General Meeting, a constituent meeting of the new Board of Directors took place, where its President and two Vice-Presidents were elected. The current composition of the Board of Directors for the following three-year period is as follows:

“Prague has some of the best professionals in the conventions, events and incentive industry. We rate in the top 10 destinations globally and this is the gateway to our future competitiveness as the centre of inspiration, innovation and sustainability in Europe. I am convinced that the new Board, supported by the PCB team, will take us to the top 5 by 2025 and to the top 3 destinations in the world by 2030,” says Sanjiv Suri, outgoing President of the Board of Directors of the Prague Convention Bureau.

“PCB’s effort remains to develop the Prague meetings industry so that Prague retains its position among the top world destinations. Not only within the meetings, but within all business events. To achieve this, we need to join forces in the business environment and, above all, to transform the cooperation with public administration. Not only in the field of tourism, but also in the creative industry and in the export of our services to international participants. We must show our sector as publicly and socially beneficial for the whole Czech Republic. Our members face tough challenges. From the impact of events such as the pandemic and the war in Ukraine, through global trends such as sustainability, digital transformation, to the attractiveness of working in our sector for younger generations. While meetings Prague competes with other destinations, from the employment point of view, we fight for employees with other sectors in the Czech Republic. For Prague to remain among the world‘s top in the industry, we must perceive these challenges as opportunities. And to develop them better than our competitors do,” says Jan Kubinec, the new President of the Prague Convention Bureau Board of Directors, commenting on the priorities of the Prague meetings industry.

In previous years, Jan Kubinec, as well as Daniel Nedvěd, served as members of the Prague Convention Bureau’s Audit Committee, together with Martin Lehný from Senator Meetings & Incentives, who decided not to run for another term. Martin Haloun from Auletris, Aleš Moravec representing the National House of Vinohrady and Marie Šteglová representing the Prague Exhibition Grounds were elected as new members of the Audit Committee for the upcoming period.

„Our Board of Directors and the Audit Committee members have certainly not had an easy role in recent years. In addition to managing their own companies at a time when the pandemic was shaking the world, they put all their energy into supporting and managing the meetings industry at the destination level, for which they deserve a huge thank you. I firmly believe that the new, as well as the continuing members of the Board of Directors will succeed in building on the work of their predecessors, and together we will be able to bring the Prague meetings industry back to the global limelight. The new strategy of the Prague meetings industry, which we created last year, should also significantly help us to achieve this,” concludes Roman Muška, Director of the Prague Convention Bureau.