Navalis to be Held in Prague on May 15

The NAVALIS Saint John’s Celebrations are a commemoration of the best-known Czech saint and Prague native, Saint John of Nepomuk, patron of all people of the water.

A mass is held with a procession and a Baroque water concert on the Vltava River beside Charles Bridge on the evening before the holy day of Saint John of Nepomuk (so-called vigilia).

Every year there are numerous special events, such as a folklore festival,  a regatta of historical and dragon boats, markets, lectures and exhibitions. Venetian gondoliers regularly take part in the event and amaze visitors with their captivating songs.

John of Nepomuk, the patron saint of Bohemia, is revered among the Catholic faithful as a protector from floods and drowning.

Legend has it that King Wenceslas IV had him tortured, killed and thrown into the Vltava River because he refused to divulge the queen’s secrets, told to him in confession.

Statues of John of Nepomuk, such as the one installed in 1683 on the north side of the Charles Bridge in Prague, were erected long before he became a saint, notes historian Jiří Louda.

“At the beginning of the 18th century, John of Nepomuk was already quite popular in Bohemia as a patron of confessional secrets. But he was beatified only in 1721 and canonized in 1729.”

“The first Navalis festivities linked to St John of Nepomuk took place in Prague in 1715. They were inspired by the city of Venice, where the tradition had been established already in the Middle Ages. For the inhabitants of Prague, May 15 was one of the most important days and the festivities were the biggest and most spectacular celebrations of the year.” 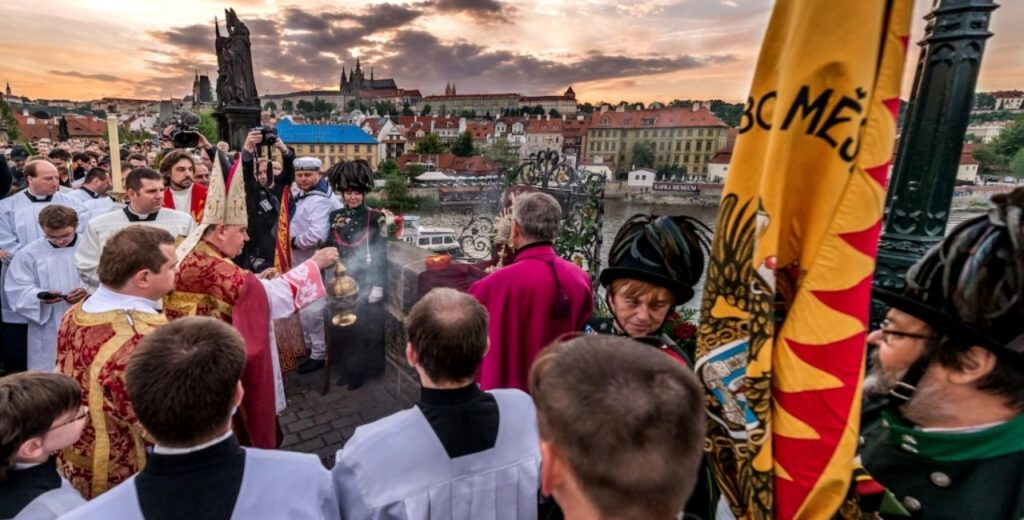