The new Motorists party presented its program and candidate for the Prague municipal elections on Tuesday at the Žižkov Tower. It will be led by the spokesman of Václav Klaus, Petr Macinka, and in other places, for example, the economist Vladimír Pikora or the former director of TSK Petr Smolka. Motorists want to drastically revise the number of cycle lanes in the city, introduce a free metro or one parking card for all parts of the city. “Our city was attacked by Pirates four years ago. Mayor (Zdeněk) Hřib enabled the rise of cycle fanatics from the Praha group, who only restricted, overeducated and bullied drivers,” explained Macinka, the main reason why the motorists’ party was created.  “We want to break down all the barriers that the current Deputy Mayor Adam Scheinherr put in the way of drivers. We will review all cycle lanes that Prague has literally been littered with in recent years. We want to delete them,” said Macinka forcefully. In addition to cycle lanes, motorists also want to reduce the number of auxiliary road markings. “I mean all those forests of green plastic posts. In case of electoral success, we want to do it before winter, so that these abominations do not complicate the work of road workers,” he added. Motorists see public transport as the only alternative to cars, which they want to support. For example, they want to ensure free metro fares for the citizens of Prague. Furthermore, they would like to reduce the price of an annual travel coupon valid throug

hout the city from the current 3,650 crowns to 1,000 crowns. Motorists see another problem in parking. According to them, the current system of annual cards, which are valid for each part of the city separately, bullies the people of Prague. “We see no reason why the people of Prague should be limited and have to purchase several parking cards for different parts of the city. That’s why we want to introduce one parking card for the whole city,” said Macinka.
However, according to him, this measure would only apply during the day. In the evening, only residents of the given city district would be entitled to parking, as has been the case so far. In addition to Macinka, the candidate includes economist Vladimír Pikora, who is the author of the economic part of the party’s program. Also former Deputy Minister of Transport and diplomat Jan Sechter and former Director of the Technical Administration of Communications Petr Smolka, who is supposed to be a guarantor of expertise in the field of transport.
JK 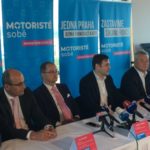 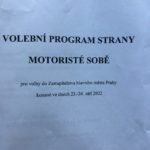