“The Russian leadership — [president Vladimir] Putin, [foreign minister Sergei] Lavrov and others at the top level of the hierarchy and commanding structures — must be held accountable for the devastating war,” Czech foreign minister Jan Lipavský told EUobserver on Tuesday (20 September). 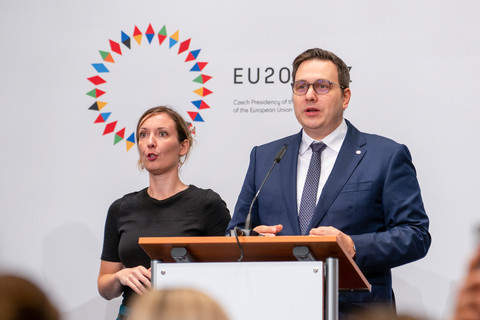 They were responsible for Russia’s “appalling and uncivilised acts”, he said. “We must not allow such crimes to become lost in time or forgotten,” he added.

Lipavský spoke amid a Czech push to create a new international tribunal to try Russian leaders for the crime of “aggression”.

It comes as Putin prepares to annex more Ukrainian territory and amid fresh revelations of Russian mass-murders of Ukrainian civilians.

The International Criminal Court (ICC) in The Hague already goes after perpetrators of “war crimes” and “crimes against humanity”.

The crime of “aggression” is defined in the ICC treaty as covering people who “exercise control” over the “political or military action of a state” when it does something of a “gravity and scale” which is a “manifest violation of the Charter of the United Nations”.

It lists “invasion” and “annexation” as examples of such acts.

The Czech Republic is spearheading Europe’s push for the Putin-Lavrov tribunal as the current holder of the EU presidency. Ukraine also backs the move.

Czech experts are studying the legal niceties of the project. “We will also be talking about this with our close partners at the UN General Assembly in New York this week,” Lipavský said.

EU leaders have roundly condemned Russia’s annexation plan, as Europe weighs its potential reaction to the escalation as well as to mass graves of civilians being found in Izyum, eastern Ukraine.

“All these atrocities and discoveries are feeding into ongoing discussions among the member states about our next step regarding Russia’s aggression against Ukraine,” an EU foreign service spokesman said.

The last time evidence of a Russian massacre on a similar scale emerged, in Bucha, in northern Ukraine in April, EU capitals ejected hundreds of Russian spies who had been working in Europe under diplomatic cover.

The EU has also imposed seven rounds of economic sanctions and blacklisted hundreds of Russian VIPs over the war since February.

But when asked if the Izyum massacre merited another round of Russian diplomat-spy ejections, the EU spokesman indicated this was not likely.

The April spy-expulsions were “not because of Bucha — it was because they [the Russians who were expelled] had been found in violation of their diplomatic status engaging in activities that go against the Vienna protocol”, the spokesman said, referring to a 1961 international treaty governing diplomatic norms.

For their part, EU institutions declared 19 diplomats from Russia’s EU embassy to be persona non grata in April.

“Detecting, countering, and disrupting the activities of Russian espionage against the Commission and its staff have always been top priorities for the Commission’s security directorate,” EU foreign relations chief Josep Borrell said on Monday in reply to an MEPs’ question on the subject.

There were “ongoing security briefings to raise staff awareness of counter-espionage” and there was “intensive cooperation with the security authorities of member states and other (EU) institutions,” Borrell said.

But for Bart Groothuis, a Dutch liberal MEP who tabled the question, Borrell failed to answer why EU institutions weren’t going further.

The chargé d’affaires at Russia’s EU embassy, Kirill Logvinov, was also a spy, Belgium’s homeland security service had warned Borrell’s people, but the EU let him stay in Brussels anyway, according to EUobserver’s sources.

Borrell “didn’t answer why the Commission, in an opportunity to throw out all Russian spies from Brussels, decided to leave some in place,” Groothuis said.

For his part, Radek Sikorski, a Polish conservative MEP, wrote to the EU Parliament president last year to warn of the dangers of Russian infiltration.

But when asked on Monday if the EU Parliament had tightened security since the war broke out, Sikorski said: “I don’t know of any improvements in the EP’s counterintelligence capabilities”.