RESEARCH Both the SPD and Prague are gaining strength

The Phoenix research agency presented the September measurement of the potential of political parties and movements in Prague. If voters had the opportunity to cast two votes, their favor would be most appreciated by the TOGETHER coalition. She would get over thirty-three percent.

The opposition ANO finished in second place by a significant distance (24.2 percent of the potential). Third is the Prague of former People’s Party MP Jan Čižínský – 22.8 percent. The second-to-last entity that got the opportunity to join the Prague municipality, thanks to its potential, is the SPD together with Trikolora and the PES movement. Research has indicated their more than ten percent chance of success when using two votes.

The August survey, which took preferences into account, put the SPD at just under five percent.

The chances of two new candidates are also worth mentioning. Motorists would potentially gain exactly seven percent, and Prague without chaos would gain four tenths less. KSČM is at three percent and STAN, damaged by the Dosimeter case, is just over five percent (5.6). 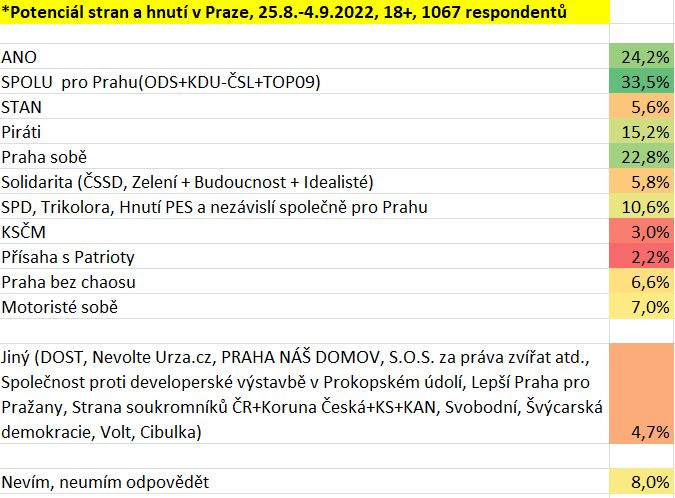 “We are pleased with such trust. We are happy that people have registered and perceive that Prague without Chaos brings to politics not only its rich experience in the field of energy and transport, but that we offer concrete solutions to the energy issue that can help the residents of Prague,” its leader Jaroslav Ďuriš told our editors.

“We have only recently introduced the project, the personalities and the basic program points, yet surveys immediately attribute to us a relevant electoral potential. This growth of the Motorists reflects the situation in the city, people’s dissatisfaction with the activist administration of Prague, but also their mistrust of the indolence of others,” the election leader of the Motorists, Petr Macinka, said to PrahaIN.cz.

The research was carried out on a sample of 1067 respondents over the age of eighteen from August 25 to September 4.