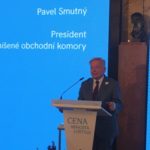 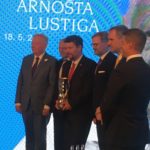 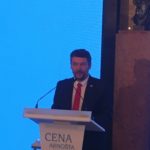 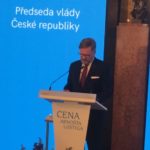 Šimon Pánek is the new winner of the Arnošt Lustig Award. The Czech-Israeli Mixed Chamber of Commerce honors her with personalities who have shown courage, bravery, humanity and justice. According to the chairman of the committee, Jan Pirek, who decides on the award, the founder of People in Need clearly meets all the criteria. The Arnošt Lustig Award is usually presented by top politicians, this year it was awarded by Prime Minister Petr Fiala.
“The committee unanimously agreed that the Arnošt Lustig Award for 2021 would be won by Mr. Šimon Pánek,” said Jan Pirk, chairman of the award committee. He specified that the agreement on the selected personalities must always be unanimous.  He noted that the Lord had already begun charitable activities before the revolution. “In the 80’s, he helped his high school classmates to the people of Armenia, where there was an earthquake. Then he became one of the leaders of the Velvet Revolution, “Pirk recalled. According to Prime Minister Fiala, “he has been tirelessly fighting for human rights and helping those who are currently in need for three decades.” According to him, he is “extremely empathetic, human, with a natural sense of justice and solidarity.”
Pánek receives an award from surgeon Pavel Pafek, who was his laureate last year. In 2020, at the time of the covid-19 pandemic, the committee did not award the prize; Historically, the first winner of the Arnošt Lustig Award in 2012 was Václav Malý, Bishop of Prague.  The award is given by the Czech-Israeli Mixed Chamber of Commerce. Its chairman Pavel Smutný emphasized that the award – like Arnošt Lustig – does not characterize perfection, but humanity. “We have nothing more and nothing less. This country has some great people, some of whom received the Arnošt Lustig Award, then a country that simply holds the country. It keeps it from collapsing and, most importantly, from collapsing morally, “he said.
Arnošt Lustig Award was established in 2011 by the Czech-Israeli Mixed Chamber of Commerce to support the legacy of Arnošt Lustig. Journalist and writer Lustig died on February 26, 2011 at the age of 84. As a teenager, he went through the ghetto in Terezín and the concentration camps in Auschwitz and Buchenwald. Experiences from that time represent the focus of his work. His most famous works include Diamonds of the Night, Dita Sax and Prayer for Catherine Horowitz. After the war, he studied journalism and worked, among other things, as a reporter and director of Czechoslovak Radio, editor of the weekly Mladý svět and screenwriter in Barrandov. He emigrated in 1968. He first lived briefly in Israel, then in Yugoslavia and since 1970 in the USA. He returned to the Czech Republic regularly in the last 20 years of his life.
In 1989, Šimon Pánek was one of the prominent student leaders of the Velvet Revolution and briefly sat in parliament. However, he preferred charitable activities to politics, began working on humanitarian and development aiPeople in Need operates in 30 countries, and in more than 60 cities in the Czech Republic and Slovakia. It helps not only after natural disasters, such as floods and last year after the tornado in Moravia, but also focuses on the issues of inclusive education, debt, inadequate housing and unemployment. People in Need is also behind the One World Human Rights Documentary Film Festival. He is currently helping people affected by the war in Ukraine significantly.  Pánek has been awarded several times for his work. In 2002, he received the Medal of Merit medal from Havel, and a year later received the European of the Year award from Reader’s Digest Výběr magazine. In 2010, he received the Memory of the Nation Award from the civic association Post Bellum.d projects, and was instrumental in the founding of People in Need. Today, he is still the director of this largest Central European organization of its kind, which has operated in many crisis and war areas.
JK