The 10th CZECH UKULELE FESTIVAL was traditionally held from Friday 29 to Saturday 30 July 2022 in the Únětický pivovar. The festival was also organized in the covid years 2020 and 2021, but on a much smaller scale. This year’s jubilee year was focused retrospectively and they were already approached well-known performers. Foreign guests presented themselves on the first day of the festival. On Saturday, a wide range of workshops and stands selling various instruments were prepared. The workshops were aimed at complete beginners, at children interested in playing the ukulele, and at those who were interested in master classes and advanced techniques. Those interested also had the opportunity to jam and test their playing skills. The music production traditionally created a great mood at the festival and, of course, good beer!  Since the first year of the festival, which was held in August 2013, the Czech ukulele festival has built a reputation as the most open festival of its kind in Europe. He introduced interesting artists from as many parts of the world as possible. The strong educational focus of the festival is also sympathetic. 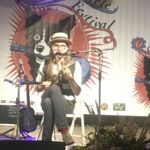 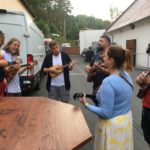