In Karlovy Vary, the traditional Tap Run has already taken place. More than 50 bartenders in typical aprons and white shirts with black bow ties walked through the Karlovy Vary colonnade again this year.

Visitors to the Karlovy Vary Film Festival were reminded of the legendary Czech film Get Up! and together with the runners paid tribute to the actor of the title role, Josef Abrhám. The best bars from all over the country took part in the run, including the finalists of the Pilsner Urquell Master Bartender competition.
The Mill Colonnade in Karlovy Vary witnessed the third year of the Tap Run this year. On Thursday, from 5 p.m., festival guests watched the run, which was started by the Mayor of Karlovy Vary Andrea Ferklová, Pilsner Urquell brewer Václav Berka and screenwriter and senator David Smoljak. A large part of the running taps were recruited from the finalists of the Pilsner Urquell Master Bartender competition. It aims to increase the level and quality of draft beer and develop a unique Czech beer culture. The “hunt for the boss” in the symbolic setting of the Mlýnská colonnade was only 300 meters long, but the bartenders put even more passion and enthusiasm into the run and there was no shortage of dramatic moments.
Although it was not a race in the true sense of the word, the fastest runner was Dominik Kirchmann Urban of the Plzeň restaurant U Holiše. “A win in a year where we remember Mr. Abrhám is especially valuable. I think I can speak for the other colleagues as well, that we all thoroughly enjoyed it. I’m also happy that this way I can present our business U Holiše to people, which is definitely worth a visit,” says Dominik Kirchmann Urban, winner of the Tap Run
JK. 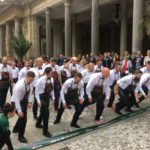 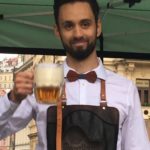 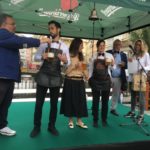 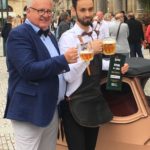