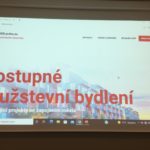 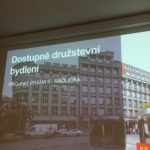 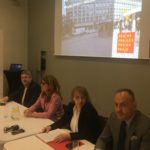 An expert team led by Hana Kordová Marvanová, Councilor for Legislation and Housing Support, prepared an intention to implement a public contract called Partner for the DDB project – Radlická locality (Smíchov). This should be approved by the City Council in May. of Prague. After that, a partner will be selected in the selection procedure, with which Prague will establish a housing cooperative, in which the people of Prague will be able to enter as cooperatives. Thanks to the provision of land by Prague and other advantages of the project, these cooperative flats should be about 25-30% cheaper compared to market conditions, and thus also more affordable.

Principles of the project Affordable cooperative housing with the participation of the capital The City of Prague approved the City Council Prague in December 2020. Subsequently, suitable plots for the construction of cooperative housing in Radlická Street in Prague 5 and in Oistrachova Street in Prague 13, which are owned by the City of Prague, were selected. of Prague. At the end of last year, a Memorandum of Cooperation was approved between the Prague and the city district of Prague 5 on the Radlická project. There are planned construction of about 260 apartments, of which approximately 85 apartments will be available to the city and will be intended for housing people working in professions needed for the operation of the city (teachers, paramedics, firefighters, etc.), and about 175 apartments will be intended for Praguers who do not have the opportunity to buy your own home. The Memorandum of Cooperation with the City District of Prague 13 is also ready for approval. Other city districts – Prague 12 or Prague 10 – are also interested in cooperative construction with the participation of the city.
To join the cooperative, it will be necessary to meet the following conditions: citizenship of the Czech Republic and permanent residence in the capital. m. Prague, absence of own housing and indebtedness (taxes, health insurance, social security, debts to the capital city of Prague and legal entities established by it). The main advantage of cooperative housing is that those interested do not have to take out a mortgage, but the construction of the house will be financed from a loan that the cooperative will take for construction. Individual cooperatives will repay this loan as part of the monthly payments associated with the use of the apartment.
The Affordable Cooperative Housing project is an innovative solution with a high degree of legal certainty, which, in addition to increasing the affordability of housing for citizens, does not require large one-off investments by the city, ”says Jiří Kučera, lawyer. “
The first part of the city where the project will be implemented is Prague 5. “An apartment in Prague today costs about as much as a smaller pyramid in Egypt used to cost. We support all forms of housing that will help stir up the overpriced housing and real estate market. I am pleased that a pilot project of cooperative housing is being set up in Prague 5, which will create up to 260 flats. We are also preparing other projects that will give young families the prospect of affordable housing. For example, another 40 cooperative flats are planned in Nad Koulkou Street, ”adds Renáta Zajíčková, mayor of the Prague 5 district.
Another part of the city where the project is planned to be implemented is Prague 13. Its representative Ivana Todlová specifies: “Together with the City Hall, we have prepared a project of 150 flats in Oistrachova Street. These are small apartments 2 + kk with a size of 50 meters. Prague 13 has selected other localities for a similar purpose. In this way, we believe that we will help young people to find housing and a family. “
For all those interested in the project Affordable Cooperative Housing hl. The City of Prague has prepared a website where you can find all the information about this project and the possibilities of participating in it: ddb.praha.eu.
JK