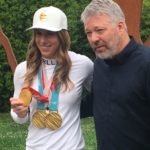 Ester Ledecká’s next successful season despite her embarrassing introduction and health problems at the Olympics. Ester Ledecká is exceptional in the history of not only Czech winter sports. He is one of the elite on snowboarding and skiing.  According to the value of podium places, Ledecká has had the most successful skiing season. She stood on all three levels. She gained the most downhill points in her career, finishing third among the elite five in one of the speed disciplines for the third year in a row. She turned her two starts in the Snowboard World Cup into second and first place.  Overall, she became the fifth member of the club of such exceptional Czech athletes with the third Olympic gold, and she also attacked the medal in each of her ski starts. What has she achieved since the March World Cup final? “I was in London for a while, I rested there. Then I had testing. I wouldn’t say I was hanging out, but I had a looser regime. I mainly trained fitness,” she said on April 25. 2022 at a meeting with journalists. In further preparation for the new season, Ledecká is going to Chile and the United States, but before that she would like to complete the premiere race in another popular sport – windsurfing. “One sponsor attracts me to the famous Le Défi Bay race in France. I have been sailing since I was five, but I have only completed the race twice as an instructor in Lefkada. So I hope to be able to ride in France. or I will die, “she said ahead. In May, as a guest of his main sponsor, he will watch the Monaco Formula 1 Grand Prix. “I think their world is similar to ours in something. They also risk their lives – much more than we do, of course. And it also depends a lot on materials and technologies,” said Ledecká.