It’s Prague in 1986. Levi’s button fly 501 jeans are all the rage and a must-have, even in Communist Prague.

But there was no Levis store or really any Western retailers for that matter. Of course, there’s no Amazon, Alza or other internet retailers.

So, how would you get your acid-washed button fly jeans?

That’s where Tuzex came in. Started in 1957, state-run Tuzex began as a network of retailers across Czechoslovakia offering
groceries, but they expanded quickly to a wider market from there. With Tuzex, you had to use foreign currency (or gold) to buy “Tuzex vouchers” (known as “Bony”), which were in Czechoslovakian crowns denominations.

Vouchers could be redeemed in Tuzex stores for retail items. By 1988, at the peak of Tuzex, there were 170 stores across Czechoslovakia, offering up items ranging from clothing to cosmetics and food to cars and other long-service products (especially electronics). In addition to the predominantly opened up it up to black-market sales Western goods from non-socialist countries consisted of approximately one-third of the range of export programs Czechoslovak producers.

Goods in Tuzex were generally regarded as luxury or more exclusive quality than products that were available in conventional stores.

In particular, demand were big ticket items like cars, washing machines, radios, tape recorders, and other electronics otherwise unavailable. Many of the brands carried by Tuzex were exclusively licensed and couldn’t be found anywhere else. 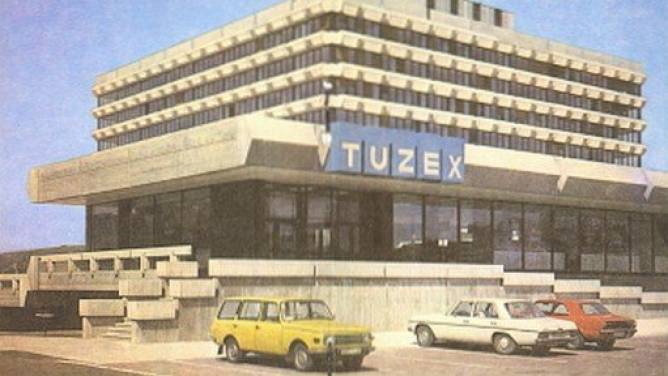 Several products and brands available in Tuzex are forever inscribed into Czech history. Blue jeans made their first appearance in Czechoslovakia thanks to Tuzex and were one of the most sought-after type of clothing that were available amongst the youth.

Brand names like Wildcat, HIS, Levis Mustang and others flew off the Tuzex shelves in 1968. From a control standpoint, Tuzex was also an important tool for Communist Czechoslovakia to evacuate foreign currency and gold from the population.

Since Tuzex was state-owned and Czechoslovakia had extremely high import duties, The Tuzex market discouraged people from finding ways to import products from abroad and motivate them to exchange foreign currencies for coupons. In the early years, Tuzex vouchers were only valid for 3 months.

During the 1980’s the period of validity extended to one year. The expiration meant it was a parallel currency with a lifespan, which opened up it up to black-market sales.

Outside most of the “official” places for the exchange of vouchers for foreign currency (or gold) you’d usually find droves of black-market voucher sellers, or “vekslaci”, casually asking passerby’s if they wanted vouchers in exchange for Czech crowns (as opposed to gold or foreign currency). And while it was technically illegal, it was a normally tolerated activity.

Interestingly, vouchers weren’t the only pioneering currency Tuzex made. They also issued the first payment card in the history of Czechoslovakia. In 1988, Živnostenská bank began to issue the Tuzex card, which made it possible to make cashless payments at branches Tuzex. 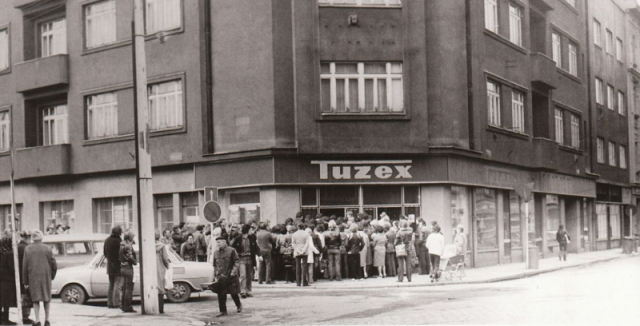 At the time just before the Velvet Revolution, Tuzex had an annual turnover of over $250 million USD. In 1988, they sold tens of thousands of TVs, VCRs, and over 10,000 personal computers. But, following the Velvet Revolution, the easy access to Westernized goods meant that Tuzex no longer had a captive market – and sales plummeted immediately.

Floundering in an open market, Tuzex was selling goods directly for Czech Crowns when they stopped selling vouchers completely on June 30, 1992.

With a strong brand name, Tuzex made several attempts to re-define themselves, even as a travel product before falling into liquidation in 1998 with an on-the-books loss of 120 million crown.