The National Day of Vietnam

The Embassy of Vietnam has organised the celebration of the National Day on the 30th August.  The location has been the prestigious Hotel Grandior, located in the heart center of Prague. The hosts has been welcomed by the Ambassador of Vietnam, His Excellency   Thai Xuan Dung.  The event has been attended by other ambassadors and members of the diplomatic and business community in Prague and has been enjoyed by all of them. Vietnamese typical delicacies have been offered to the public.  The Vietnamese institutions have been represented by their Deputy Minister of Foreign Affairs, whereas the Czech institutions have been represented by the Deputy Minister of Foreign Affairs Mr. Martin Tlapa. 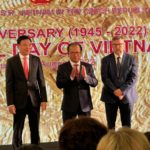 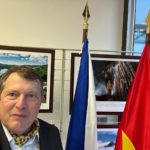 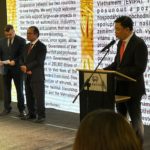