A couple of Lucki OrionStar robotic waiters will join the Gastro team of the Municipal House Cafe. The operator of the cafe, Vyšehrad 2000 group, promises new colleagues not only to make service more efficient and faster, but also to attract new customers.  “From our new robotic members of the gastro team, we mainly promise quick involvement in the operation of the cafe, punctuality and care,” says Martin Pánek, commercial director and member of the board of Vyšehrad 2000, which operates the Municipal House Café, with exaggeration.   “Both robots quickly became an attraction for our guests, who film them and take pictures with them. Of course we are happy about that. At the same time, I like the idea of ​​two seemingly unrelated opposites – modern technology and history, which flows not only through the space of the cafe, but through the entire building of the Municipal House,” adds Pánek. At the same time, he believes that the technologies of the 21st century are already facilitating work in many fields today, and the gastro and food industry are no exception.  The Lucki robot from OrionStar helps with the delivery of prepared food and drinks, as well as the collection of dirty dishes. Operating the robot is very simple, in most cases you only need to press a button and the robot will start its journey around the restaurant. It has no problem with unexpected obstacles, thanks to the use of lidar and other cameras for orientation in space. If someone stands in front of the robot, Lucki politely warns them and continues after clearing the way. The robot can last up to eight hours on a single charge. 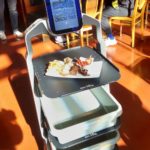